I’m Annie Rauwerda, and I started @depthsofwikipedia on Instagram, Twitter, and TikTok to highlight my favorite trivia and internet rabbit holes. I partnered with Bullish Studio to round up bizarre trivia about a new topic each week.

This week's topic: Skeletons — featuring an interview with one of my favorite Wikipedians (and creator of a certain infamous skeleton's Wikipedia page) Yitzi Litt.

Heads up — this is a long one, so it may cut off in your inbox. Before I dive into the newsletter, a few announcements: 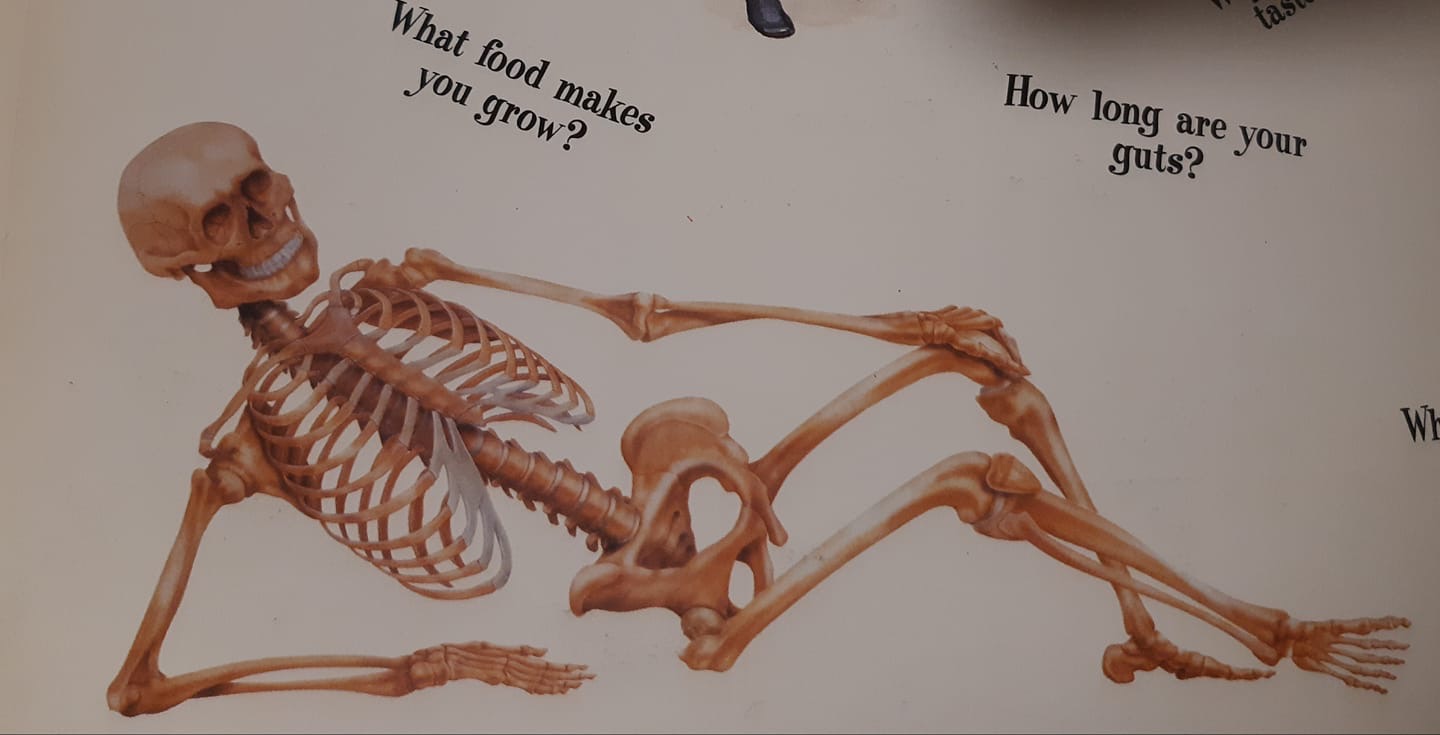 Skeletons... by the numbers:

The Skeleton Army: fighting for the right to a cold beer

You might know the Salvation Army — the sprawling Evangelical organization with thrift stores, rehab centers, and global missions. They also get volunteers to ring bells outside the grocery store at Christmas. Today, the nonprofit is not too keen on drinking. But in the 1880s, they were super anti-alcohol. Enter: the Skeleton Army.

Dedicated to harassing the Salvation Army, the Skeleton Army would disrupt anti-alcohol protests to promote the three Bs: "Beef," "Beer" and "Bacca." This was a play on the Salvation Army's "Soup," "Soap" and "Salvation" slogan.

The skeleton riots continued for a decade, resulting in an unknown number of injuries and deaths (!).

The Bone Wars: a period of ruthless fossil hunting

The Bone Wars is a rousing Wikipedia read. In the late 1800s, two paleontologists developed such a nasty rivalry that they resorting to bribery, theft, and destruction of bones. They drained their savings on self-financed digs, and their efforts led to the discovery of 136 new species of dinosaurs.

But it took paleontologists over 100 years to sort out the mess they made. They misidentified hundreds of species, often just making things up. One would hastily release a report, and sometimes the other would reconfigure the bones and release a counter-report. Check out the full article here!

My milkshake brings all the bones to the yard

The cult of the Home Depot skeleton

"When it debuted last year, the Home Depot’s 12-foot-tall skeleton was quickly dubbed the most-coveted Halloween decoration. But just as soon as it appeared, it disappeared — selling out almost instantly. A 30,000-member Facebook group emerged where the lucky could explain how they got their hands on one and the not-so-lucky could detail their pursuit of the perfect dupe. This year, the skeleton (alongside “Inferno,” a creepier, pumpkin-headed counterpart) was rereleased in July — and the two sold out soon after." 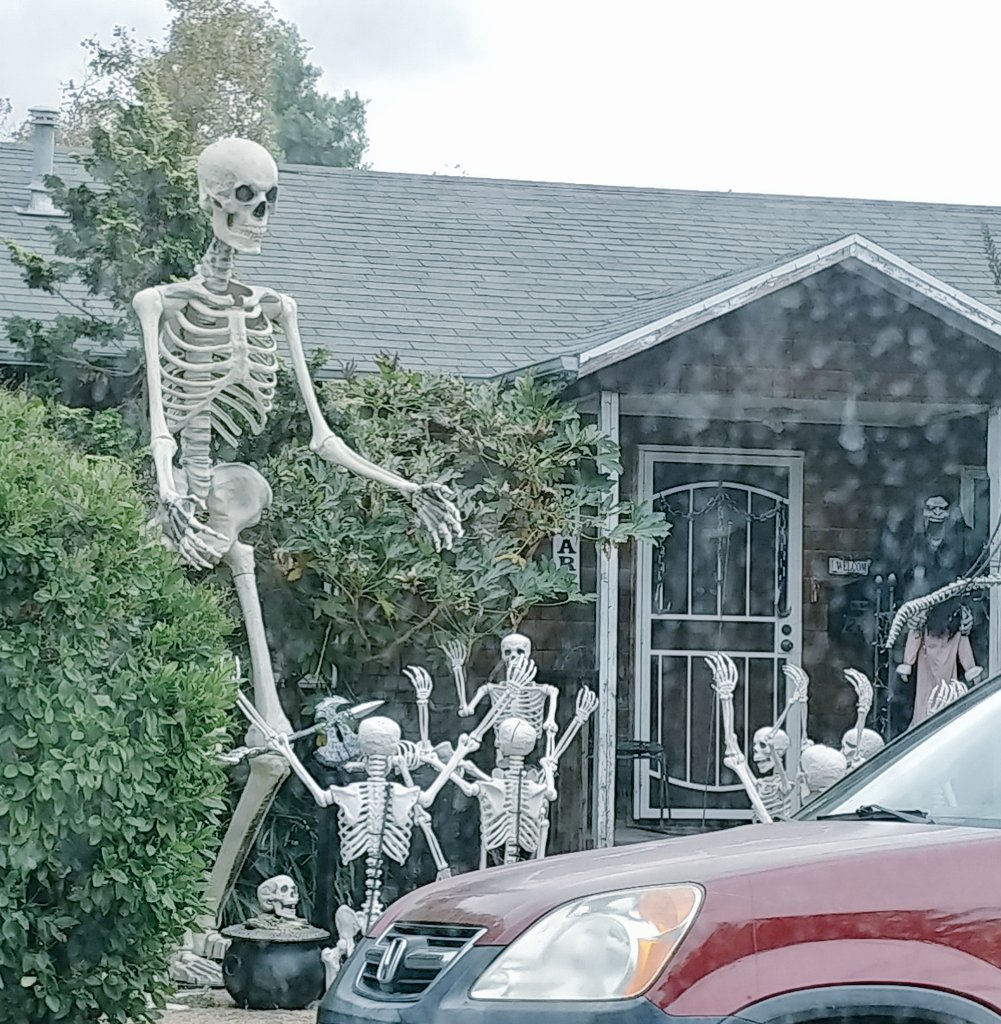 Here are the posts that the internet liked the most! I've been more active on Twitter and TikTok lately— both because of Instagram's outages and because I got Zucked!! I get my account back on Friday.

An honorable mention tweet (not mine, but I wish it was):

obsessed with the way this wikipedia article is like, "being bisexual doesn't make her confused at all. she's simply afraid of horses."

Random things I enjoyed this week:

Interview with the Wikipedian behind iconic bisexual lighting skeleton

Yitzi Litt is a 20-year-old Wikipedian with many, many interests. Hailing from Norfolk, Virginia, he's created a slew of Wikipedia articles, including the one on bisexual lighting. His friend made the iconic skeleton image: 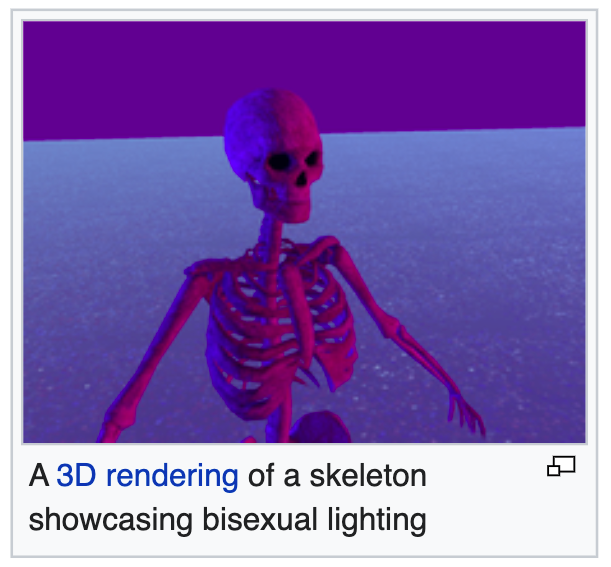 Over email, Yitzi talked to me about everything from his talk at Wikimania 2021, to his penchant for creepy images, and even to the time a bad Ambien reaction led him to unknowingly write a fake Wikipedia article.

Annie: When did you start editing Wikipedia and what topics do you prefer to edit?

Yitzi: I was an avid Wikipedia user ever since grade school. I used it to make delightfully terrible PowerPoint presentations about random interests of mine (like space, magnetism, and cockroaches). That kickstarted my love of the site, which has only grown since.While I had an account on the site for a while before that, I actually only started editing Wikipedia in earnest near the start of lockdown in 2020. For some time, a meme was going around about “the King’s Hand,” a surrealist meal a Twitter user had eaten in a dream and proceeded to bake in the waking world. I decided that such a masterpiece deserved a spot on Wikipedia — especially considering the surprisingly large amount of press coverage it had received — and wrote the entire page for it. The experience was great fun, and opened me up to the grand possibilities available as an editor of one of the most useful (and popular!) websites ever created.Since then, I’ve found myself focusing on an incredibly eclectic range of topics, covering everything from the Bible code to Dinosaur erotica (they are both excellent articles that could arguably be improved with more images). I mainly focus on what I perceive to be bizarre, awe-inducing, or misunderstood. In other words, I like to work on the sort of articles that made me fall in love with Wikipedia in the first place.

Annie: What are some of your favorite pages you’ve created or worked on?

Yitzi: That’s a hard one! Some of my many favorites include, but are not limited to (and listed in no particular order):

Annie: What do you do besides Wikipedia?

Yitzi: I do quite a lot!

Annie: I loved your talk at Wikimania this year! For anyone who didn’t see it, what were the main points?

Yitzi: There were three main points.

Annie: Okay, bisexual lighting! What brought it to your attention and what made you turn it into a page? Who made the skeleton art and how did they make it?

Yitzi: So a while back, I came across a meme referencing bisexual lighting (it might have been this one). Being in the target audience of bisexual people with a penchant for fun lighting, I went to look up more about this phenomenon on Wikipedia. I soon realized that the relevant page not only had insufficient citations, but was also missing an accompanying image. This seemed strange, considering it’s an entire article talking about visuals, with no visuals.

So, I sauntered over to Wikimedia and looked for images of bisexual people in bisexual lighting. Alas, I found what I considered to be a surprising dearth of bisexuality-related media. There were a few photos of allegedly bisexual genitalia (presumably taken from public domain pornography?), but none of those images seemed quite appropriate or properly lit. Meanwhile, a quick Google image search turned up millions of excellent example images of bisexual lighting. But of course none of those images were public domain, so they were effectively unusable for Wikipedia.

My friend @StarSkull999 offered to donate one of his 3D skeleton models to science (and bisexuality). With his artistic skills, the rendering power of the Unity game engine, and my Wikipedia knowledge combined, we finally uploaded… the bisexual lighting skeleton. It promptly went viral, of course.

There are now a surprisingly large number of proudly bisexual people using the image to represent themselves online, which is really cool. At one point Lil Nas X retweeted someone with a bisexual skeleton profile picture, and there’s at least one album using our bi skeleton as cover art. Every few days, I get a notification from a random friend that they’ve seen our skeleton in some viral tweet, Reddit post or elsewhere.

It’s still quite a surreal experience knowing that my most lasting internet legacy may just turn out to be a skeleton in bisexual lighting, gracing the page of a single Wikipedia article.

Annie: For anyone who isn’t an active editor, what advice do you have on getting more involved in Wikipedia?

Yitzi: Community is key. Editing Wikipedia can be very confusing to beginners — and even experts sometimes! A community of friendly, more experienced peers is essential.

I highly recommend joining a community with at least some other editors in it. Wikipedia: Discord is a great place to start, though the atmosphere can be a bit intense sometimes, and it isn’t for everyone. You can also try searching for fellow editors on your preferred social media platform.

Yitzi: I would like to add a rather silly story that I’ve never had a chance to share with anyone until now. At one point a few months ago, I was having trouble sleeping, and my doctor prescribed me Ambien. A few nights into taking it, I woke up one morning to realize that I’d somehow managed to write an entire fictitious Wikipedia article the previous night and had published it without anyone noticing the entire thing was fake! I franticly got in contact with some Wikipedia admins who kindly helped me take it down without banning me, or otherwise destroying my online reputation, on the condition that I don’t do something like that again.

Suffice it to say, I am no longer on Ambien. The article itself has mostly vanished from the internet, but you can still find a copy here.

That's all for today! As always, feel free to forward this to a friend and send your thoughts to [email protected]. I really like your emails!